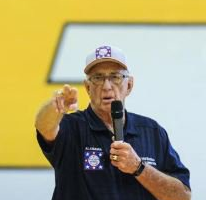 Tomorrow, September 30th,will be a bittersweet day for myself and the other members of the State and National Board of Directors  of Dixie Youth Baseball.

Harold Bobo of Crossville Alabama is retiring. To everyone his name is “Coach” he was the Head Football Coach at Crossville for many years. Coach became involved with Dixie Youth in the 1980’s when he made a trip  to Gulf Shores to bid on bringing a State Tournament to Crossville.
In the ensuing years, Coach has served as and Assistant District Director, District Director and for the last 9 years as one of the 3 National  Directors representing Alabama on the National Board. He has  always done an outstanding job with any assignment that he was asked to perform and has served the last several years as Tournament Director for the State Rookie and AAA Tournaments. Coach will be missed by everyone in Alabama Dixie Youth.
Personally, I will never forget the trips that Commissioner William Wade, Coach,and myself have made to Troy, Enterprise, and Dothan. Coach kept us entertained with his insight into the current price of cows, local Politics and his one and only trip as Coach of Crossville to Gordo to play the Green Wave when both teams were undefeated in 1985. Needless to say, since I mentioned this the Green Wave came out on top.
I also have to mention Ms. Glenda, Coach Bobo’s better half. She has been a mama and a Grandma to all of us in Alabama Dixie Youth  Baseball.
We will surely miss them both, but by their service to this organization they have enriched the lives of thousands of children across Alabama.
Moving forward we welcome Charlie Bell of Dothan on board as a National Director. Charlie has been involved with Dixie Youth since 1984 when his son was 5 years old, since then he has umpired, served as an assistant district director, Deputy State Director, and now as a National Director. I look forward to working with Charlie in the years to come.
Raymond Housel
State Director
Alabama Dixie Youth Baseball